A Dance With Dragons 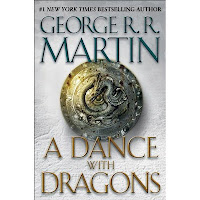 Author: George R.R. Martin
Series:  A Song Of Ice and Fire, book 5
Year published: 2011
Pages: 1300, over two volumes
Time It Took To Read: Three days
Alas that I have finished the published books for now. Alas. I'll be dreaming of flying round on the backs of dragons for ages now.  This book picks up pretty much exactly where Feast for Crows left off, following the different paths of the multiple main characters. The first half concentrates on the action around King's Landing and the second half concentrates on the South and the wall. The two join up towards the end of the second part.
People you think are going for the long haul die, others reappear when they shouldn't, and someone finally gets a little comeuppance. But the reason I love these books is because there is no linear action-judgement-consequence. Someone does something vile and gets off scot free. Someone else leads an apparently good life and suffers all manner of hell. Nobody is wholly good or bad (though some are wholly stupid) but it doesn't matter if what they are - if they're in the way of the story, they die.GRRM is a twisted puppet master.
Hopefully, Winds of Winter will be released next year and I won't have to writhe in expectation waiting for it for six years.
If you haven't read these books, and you like fantasy or sagas, and you think you'll enjoy them, try and read them all consecutively. It gives you a much better idea of who's who, family trees (the appendices help, but they're not very well written) and WHY things happen. I read the series with long gaps between books 1 and 2, and 3 and 4 and it made somewhat disjointed reading, while I tried to remember who was who. I will re-read the lot when the next one comes out.

Email ThisBlogThis!Share to TwitterShare to FacebookShare to Pinterest
Labels: fantasy